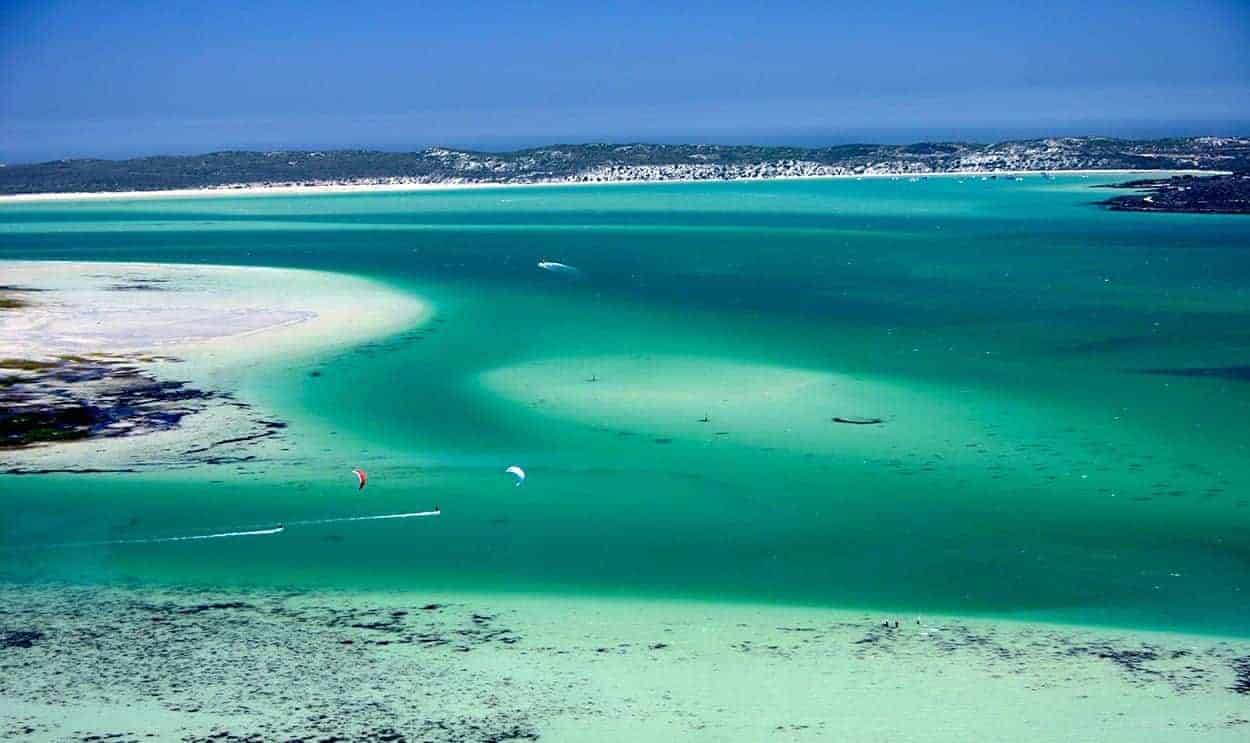 This is a spot guide to kiteboarding in Langebaan, South Africa. Read-on to find out about the wind season and discover some of the best kiteboarding spots Langebaan has on offer.

After a mere 90 minute whip north of central Cape Town, you will reach the world renowned kiteboarding town of Langebaan. Described as “heavenly” for its warm, butter-flat waters, your kiteboarding playground covers acres and acres of calm, turquoise, lush lagoon water. Compared to the wild south, this area is safe and secluded with consistent cross-shore winds, a tonne of space, and a beautiful soft, sandy bottoms!

A true adventure playground for anyone who fancies a dip, Langebaan is located on the west coast of South Africa and is a kitespot that can absolutely be shredded by all. Known as one of the best and most popular kiteboarding locations in South Africa, it has perfect entry conditions for beginners as well as freestylers, and the lack of shore break makes this area really quite fail-safe.

Wade out to the channel for a good 200-300m at waist height before hitting the channel! The two main kiting launch sites here are Main Beach and Shark Bay (the small, pussy-cat kind) which splits the crowds somewhat. The prevailing winds arrive from the South / South-East and can hit up to 40knots on a really heavy day… but generally it’s more chilled than that and it’s Cape alternatives.

Langebaan generally plays the opposite of Cape Town, so when it’s windy there, Langebaan is calm and vice versa. October to March is the best time of year to hit this spot (South African summer), with December and January being the prime kiting time. Expect anywhere from 10-25 knots (side onshore) throughout this period.

The temperatures hits around 25°C degrees in this region but the waters vary – Main Beach waters are cooler than Sharks Bay at 17°C degrees, and 24°C in Sharks Bay. Probably best to pack a wetsuit anyway.

Although Main Beach and Sharks Bay are close to one another, the conditions can vary quite a bit so mix it up and do both in one day – there isn’t much point in waiting for the wind in one spot, if its neighbour has a tonne of it – usually it’ll blow on one side of the lagoon and the mornings tend to be calmer than the afternoons.

The name is a little joke. They don’t have shark-sharks, just little sand sharks. In honesty, if they pop up, then they did so accidentally as they’re really not interested in being hit by whizzing boards flying by, so you’re in safe territories here. In fact this spot is celebrated all over the world for its jaw-dropping beauty. Better for the beginner riders, this area is flat, waist/chest deep for a good 400m+ into the channel, warm and relaxed.

There isn’t much else around so pack a lunch and some liquids. Keep your eyes on the tides here too; high tides come in quite far so launching space becomes limited, but during low tide, there is a shed load of sand for all. A top tip is to leave your gear high on the beach to avoid it being underwater after lunch!

Note, the road entrance is tricky to find, down “Black Mamba Hill” (a right turn at the bottom of the hill en-route to Langebaan). Just follow the “no entry” signed dirt road for 200m where you park up, and walk over to your cracking nature arena.

Set at the end of the village high street, slap bang in the middle of Langebaan, you’ll find the advanced, adrenaline junkies and the ambitious in these deeper flat-waters. Navigation around swimmers and anchored boats comes as standard here on Main Beach’s shallows, but head further out in the channel for some jump ‘n’ bump, and then further again to the deeper flats behind the opposing Schaapen Island.

At the end of the day, a beachfront beer is easy and parking is also right on site, making this the busier spot when the wind is pumping. The offshore winds here can get gusty, so the advice (if you have the stamina) is to head downwind to the beach barrier… the calm sits just behind this if you can reach it!

Just a bit further north of the Main Beach, this little ripper is a quieter alternative for true-blue freestylers on those windy days. Park up just in front of Club Mykonos Resort to take advantage of the small waves and breaks, just watch out for the currents!

South Africa is famed for its bustling Cape Town, exceptional wines and the wild Big 5. So where is better to rig up (or not, on a ‘no wind day’) than here. First things first, when Langebaan is chilled, you can be pretty sure that wave kiting in the south is banging. So there’s always somewhere to kite within a 1.5h drive.

Or go explore it!

Cape Town has much to offer on its own, being a port city on South Africa’s South-West coast. Only 1.5 hours south of Langebaan, there is plenty to keep you occupied for days. Cable up to Table Mountain for sweeping views of the cape, or trek south to the Cape of Good Hope for a drop of scenery. Boulders Beach is famed for resident penguins, and Robben Island is the notorious prison that help Nelson Mandela for so many years. (Check out The Blonde Abroad‘s travel guide for more info and tips.)

It isn’t quite home to the Big 5, but there are a shed load of other things going on. You can try waterskiing, tubing or kayaking in Kraalbaai. Or head out on a self-guided search for tortoises, whales, sand sharks, porcupines and Dune Moles. Or simply go for a leisurely drive or bike ride through this protected National Park.

Head out to one of the local winery’s such as Groote Post (south of Langebaan) or further inland to Arra, Mellasad or Noble Hill. Then you have the famed Stellenbosch and Franschhoek for those who want a whole day of it. Don’t drink and drive though – get someone else to drive you!

You’re in South Africa, so it would be completely and utterly wrong of you to ignore the fact that you have lions on your doorstep. We would suggest a night or two at Inverdoorn Game Reserve. Or, if you want something even closer to Langebaan then Thali Thali and Buffelsfontein Private Game Reserves offer buffalo, wildebeest, zebra, kudu, springbok and ostrich game to awe over.

Where to next? Stay in Africa and kitesurf in Kenya’s epic Diani Beach for cracking conditions for all levels, or hit all the best spots in the magnificent island of Mauritius!

Checkout some schools from South Africa