Kitesurfing holidays in Spain? Tarifa has the wind and awesome weather. See what makes it one of the best kitespots in the world.
share it
tweet it
Jump to
Kitesurfing spots in Tarifa 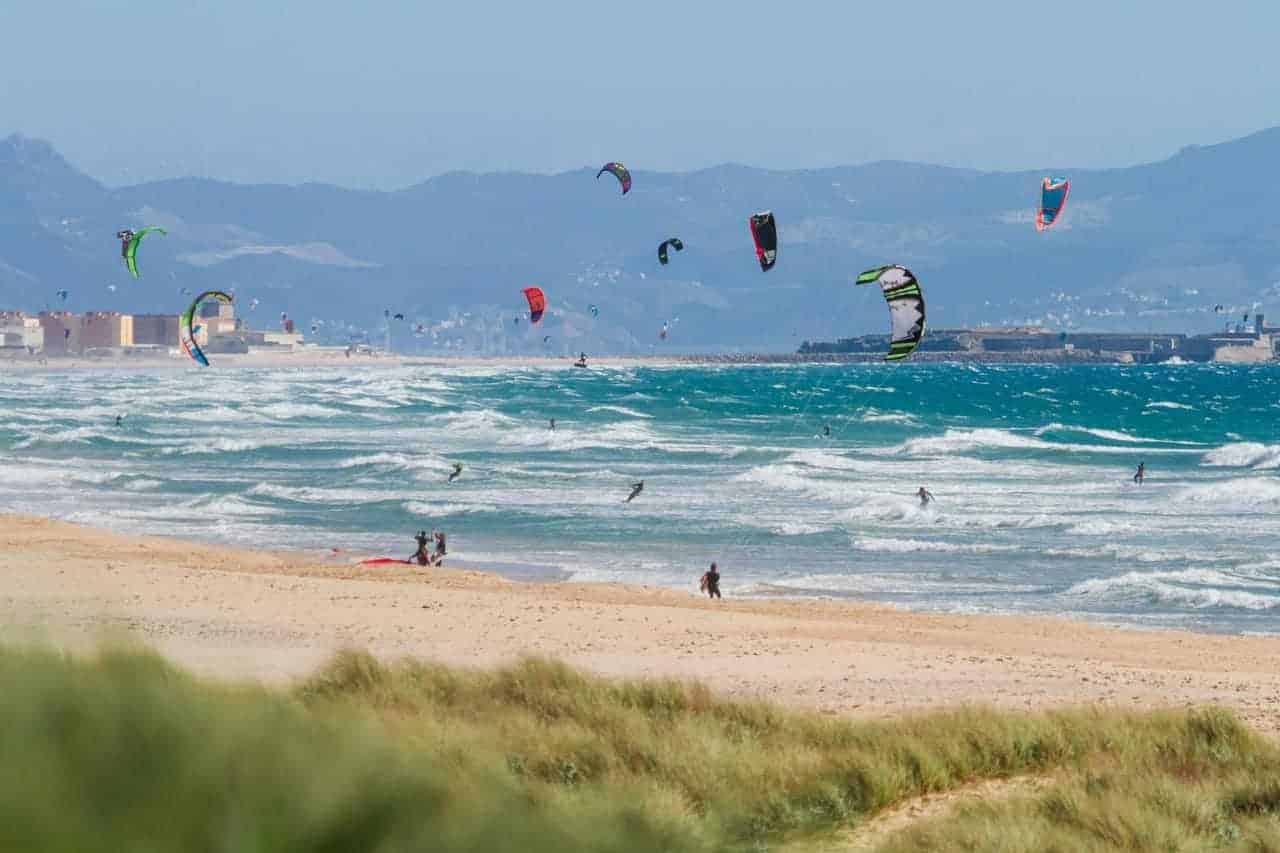 Is Tarifa one of the best kitesurfing destinations in Europe?

Looking at Tarifa is like looking at a crossroads: two seas, two continents and two completely different cultures, ready to be explored by all kinds of adventurers.

Located on one of the most southern points of the whole Europe, exactly where the “Old Continent” touches Africa and the Mediterranean meets the wild waters of the Atlantic Ocean. On a clear day, you can actually see the northern coast of Morocco and Africa. It’s only about 15km away.

This small town of Tarifa has became one of the most popular meeting points for kite-lovers.

Why? Simply because, on this crossroads lying at the beginning of the magnificent Costa de la Luz, the “Coast of Light”, two different winds meet: the wild and the innocent, Levante and Poniente.

Levante is coming from the east at speeds of 30+, sometimes even up to crazy 45 knots. It blows mostly off-shore and reaches its peak speeds when it crosses the Straits of Gibraltar. Levante is warm, gusty and unpredictable, so you do need to have a few tricks up your sleeve before jumping on it.

Levante is strong and constant. It flattens all the ripples in the sea making the water nicely calm and flat. But when the storm hits, and it happens a few times a year, a massive swell comes in bringing waves up to 4 metres high.

Poniente is a lot more gentle, but often much cooler. It blows at about 20 knots from the west, mostly on-shore. You can quite often expect choppy seas and smaller waves, but overall, you’re in good hands.

This is exactly what makes Tarifa such a renowned destination for wind sports: you’ve got 35km of absolutely amazing coast line with mostly sandy beaches and guaranteed, consistent, at times even crazy, winds for 300 days a year! Combine this with warm weather and you have the perfect spot for kitesurfing maniacs.

Apart from Tarifa’s main kite beach, you’ll be able to find several different kitesurfing spots dotted along the coast line. Located either to the east or to the west, car might be a pretty good idea.

Heads up! In winter, you’ll be spoiled for choice, but if you planned your trip for summer months between 15 June – 15 September, you may be in a bit of a bad luck pickle. Some beaches (most beaches to be exact) are pretty much off-limits for kitesurfing during the day until 8PM in the summer season unfortunately.

Some beaches are opened to kitesurfers all year round with business as usual, so your choices may be a bit limited, but you’ll have a great time after all.
The two main beaches where kitesurfing is allowed all year round regardless of summer months are Los Lances Norte and Valdevaqueros, so read on to find out what you’re in for.

This is probably the more famous of the kitesurfing beaches in Tarifa. If you planned your trip for summer, then you’ll be stoked to know that you can kitesurf here all year round.

During the summer months, kitesurfing and windsurfing zones are placed along the beach. A boat rescue service is also available and you can pre-pay your rescue if you get into trouble. These ‘Sea Angels’ will cost you just under €40 for 2 rescues, bargain! 🤘🏼 And yes, these guys get busy!

Los Lances is wide and clean white sandy beach with lots of space to launch & land. No big rocks, no major hazards. Perfectly suitable to all skill levels. If you’re a beginner riding on Levante, you may want to go easy. Make sure the ‘Sea Angels’ are in the water if no one else is watching your back.

Located within an easy reach from Tarifa and with kitesurfing permitted all year round, this long stretch of soft-sand beach is the main hotspot for the advanced kiters and pros who come to train here. Valdevaqueros works best on a strong Levante wind. The beach has two different zones for kitesurfing and windsurfing. Valdevaqueros is considered one of the safest beaches in the area because of its round shape, so even with strong Levante wind, you’re not entirely riding offshore.

Quite a few events are being organised here including the GKA World Championship. The place gets pretty crowded in the season from about June to August. But anything before and right after the season still offers a great wind and awesome rides.

Just next door to Valdevaqueros, about 10km from Tarifa. Same beach, just a different entrance. Punta Paloma has exactly the same setup as Valdevaqueros and other kitesurfing beaches on the west coast. Some experience is necessary, but overall it’s a pretty safe kitesurfing spot for all skill levels, beginner friendly and works best on Levante.

Kitesurfing on Balneario Beach is prohibited in summer season, but otherwise permitted for the rest of the year. Being so close to the tip and the Gibraltar channel, Levante really picks up on strength here, so unless you want a free ticket to Morocco, you should stay away, just dip your toes into the sand and enjoy the show!

This tiny beach sits just next to Balneario, just outside the jetty. Playa Chica is the Tarifa’s family beach. On Poniente days, the water is just mirror flat as it’s protected by the harbour walls. It is reserved for the swimmers and kitesurfing is not allowed here, but … if you ever wondered why you see so many kites here?

When Levante picks up, it tends to be super powered here in particular. On days like these when swimmers are getting their towels blown away, the beach becomes a hotspot for the pros. But due to too many hazards and strong Levante, just like Balneario, this spot is only recommended to skilled kitesurfers.

This is the South part of Los Lances known as La Jaima, sitting just behind Balneario. This beautiful soft-sand beach again fails under the summer kitesurfing restrictions. La Jaima is only good on Poniente because just like Balneario and Playa Chica, Levante here gets dangerously gusty due to the close buildings.

Located just between La Jaima and Los Lances Norte. Rio Jara offers 2 spots. One and a half to be exact. The ocean side and the lagoon. Again the beach side of Rio Jara is NO-GO for kitesurfers during the summer months. It sucks!, yeah, it does. And kitesurfing in the lagoon is prohibited completely all year round which sucks even more because this is the only spot in Tarifa with perfectly flat water all year round.

But although you’re technically not allowed to kitesurf in the lagoon at any time, the place is often packed. Mostly by those who “didn’t know”. So now you know!

The conditions on the ocean side follow the same pattern as for the entire Tarifa west coast. Poniente brings constant side-on-shore breeze with a bit of chop and smaller wave and Levante brings gusty side-off-shore winds, flattening the waves. Occasionally in winter, a storm hits and brings 3 to 4 metre high waves.

This spots gets crowdy. Well known for its waves, best for strapless, but only works on Poniente.

Although a little further out, it’s a great a great opportunity to get out from the bustling Tarifa. 70km away, you’ll find yourself riding some awesome waves. Kitesurfing is not permitted here during the summer months unfortunately. This spot is best for strapless, not so great for freestyle and twintips. Best on strong Levante wind but as you’re getting a little further, the wind weakens off a bit and it’s a top notch ride after all.

About 17km away from Tarifa heading east. Head here when Levante blows hard in Tarifa; you’ll have great onshore wind everytime almost guaranteed. It’s quite a small beach with flat water, awesome for freestyle. Although you’re not meant to kite here in summer months, it still gets busy.

When Levante hits Tarifa hard, head to Getares. You will get a perfect onshore wind, similar conditions to Palmones. Although the wind is a lot lighter here than in Tarifa, this spot is known for strong currents and big shore break and again, kitesurfing is not allowed here during summer months.

Well, let’s just say that’s less likely to happen, but if you need to take a break for the day, head to the town. The old town of Tarifa is really stunning with it’s colourful bendy streets. You can easily get lost for the day in its art shops, cafes, bars and many little food stores.

Where to next? The epic world class waves, consistent winds and 300 days of summer make Portugal a whopper of a kitesurfing spot so checkout some top notch kitespots on the lengthy Algarve coastline or believe it or not, Morocco is just a stone throw away, so book a ferry and checkout what Essaouira has to offer.

Checkout some schools from Spain