Lined with crystal blue waters, coconut palms and a prevailing north easterly wind, kiteboarding in Cuba has hit jackpot with weather, wind and water.
share it
tweet it
Jump to
Kitesurfing spots in Cuba 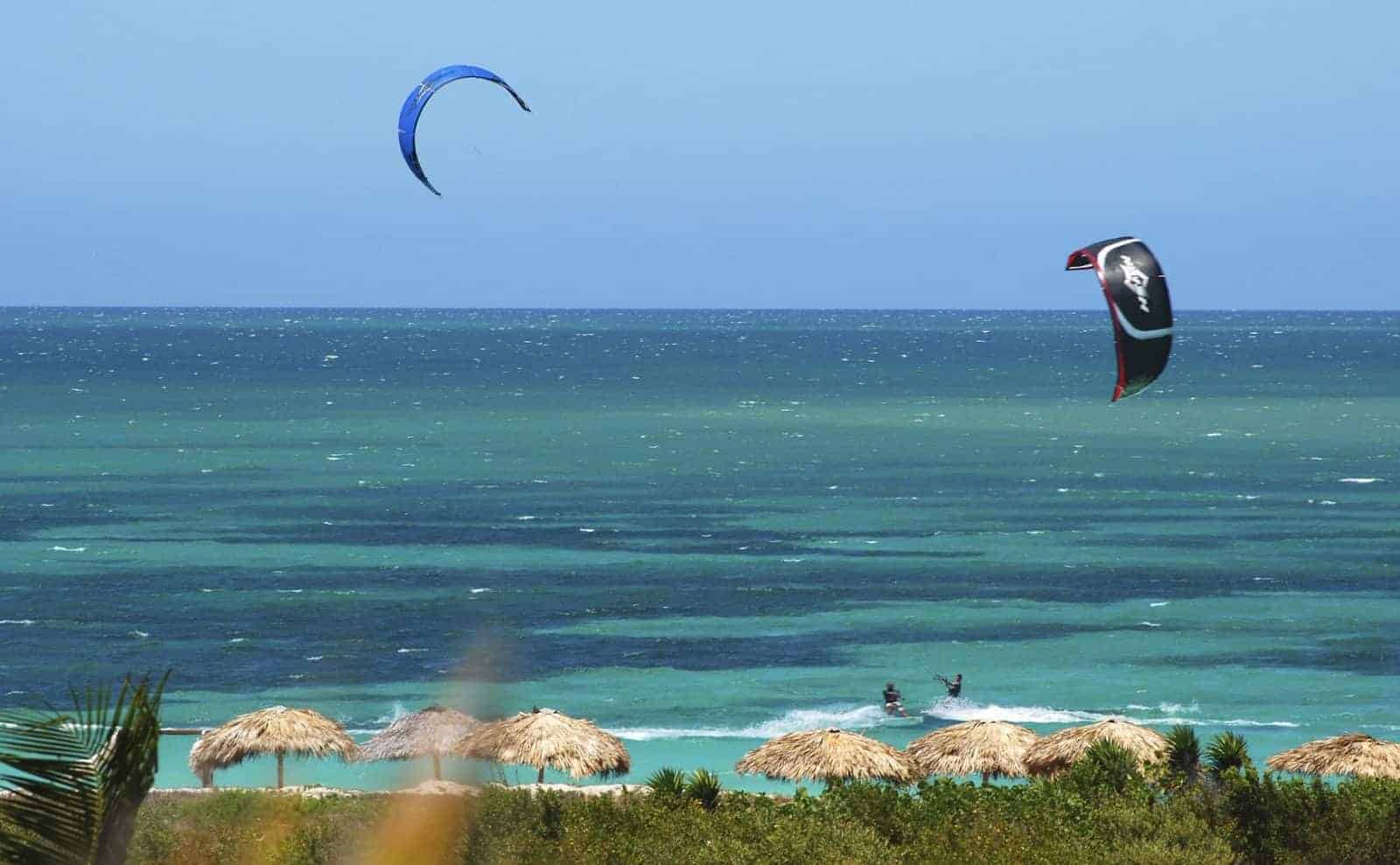 This northern, laid-back Caribbean island oozes cool, so it should be a front runner when considering a kiteboarding recce. Add wind, white sands, butter-flat waters, tropical climates and Cuba libre’s on tap – it’s time for some kiteboarding kicks along Cuba’s coastline!

Palm trees with coconuts for the taking, crystal blue waters, old retro cars and a relaxed attitude, Cuba is definitely becoming a bigger holiday destination than ever before. Direct flights from London get you from cold to cold-beer in a jiffy and that’s just the start.

Lined with kiting schools, the North and East coasts of Cuba has hit jackpot with weather, wind and water. Where the Caribbean Sea meets the Gulf of Mexico and the Atlantic Ocean, Cuba is slap bang in the middle of the best wind conditions in this region. In fact, the whole island offers something for everyone depending on where you set up, with all wind directions, waves, chop and butter-flat waters, lagoons, sea, mangroves… there is literally everything to get you in these waters.

Cuba’s kiting season generally runs from October to May, with consistent wind averaging around 15knots on the mainland and boosting to around 20 knots on the smaller archipelago islands off the north/east coast.
The prevailing north easterly winds are consistent during the season, and then take a break between June and September. These months attract some thermal wind, but generally it’s a bit flat, with up to 10 days of nada.
September can be a little stormy, so October tends to be the transition from wet to wonderful. This being said, keep an eye on the forecast as it’s not uncommon for hurricanes to swing by then too.

Most areas of the island experience a side-on or on-shore wind, making it a really great destination to get up onto the board for the first time, and learn how to kitesurf. Smooth, flat waters are matched with soft sands underfoot, and small wave ripples also add to the ease for beginners.
This being said, Cuba is a hit with freestylers, offering some playful winds and endless downwinders for the more advanced rider. There’s also some decent swells and barrels for wave riders between December and March along the north coast.
The best thing about Cuba is that there are very few hazards. Apart from humans, in most spots you won’t find rugged reef, coral, sharks or jellyfish either, so you can ride, freely and confidently!
Temperatures in season will be perfectly warm, averaging 25-30°C in the air and 24-28°C in the water with depths between knee to waist height (depending if you’re a short-ass like me or not!)

There are a number of great spots in Cuba to rip it up. Where you end up will depend on your ability level, adventure level, and thirst for getting off the beaten track … here are our picks on a mix of known and lesser known spots to check-out on your next kiting adventure.

A quick getaway from Havana, Cuba’s capital city. Access to Playas del Este is as easy as pie to reach. Head east from Havana, 20 minutes along the coast. A great spot for early intermediates, the small 1-2m waves challenge those who have mastered the basics and want something more exciting to test. A side-on NE wind keeps everything contained and safe, averaging 10-12knots. The best months to visit are the seasons’ shoulder months of October/November and April. In summer, the beaches can be busy but winter will offer reliable wind and a 7km downwinder if you’re feeling brave!

Located in the north, 145km east of Havana, Varadero is one of the more popular beach spots in Cuba. Covering a long, narrow peninsula called Hicacos, you’ll find a 20km x 10km spit, filled with white sand and coconuts. With a ton of space to launch and land, and a load of resort hotel guests to share it with, Varadero is a great place to relax and unwind for the more chilled kiteboarder. Advice is to not launch directly in front of the hotels, but at the start of the peninsula, where you can catch a full 20-25km downwinder along the entire coastline. Launch close to Barcelo Marina Palace with the NE wind that will drive you along warm, butter-flat seas to the Atlantic Ocean.

Where the first kite school opened in Cuba, Cayo Guillermo is worth a shout out. As you continue east, you eventually hit a cluster of islands, part of the Ciego de Avila province. Plan your journey as locals aren’t allowed to cross into Cayo Island unless they are working. Once on the island, well, you have reached heaven. Endless lagoons, warm, shallow and flat waters that are so clear you can see the bottom. Launch from Playa Pilar. Navigate between the small quays, freestylers love this area. Onshore winds, safe, space, clean and crisp!

Quieter than Cayo Guillermo, Cayo Coco is on the same road, but lesser known. Spacious launch sites open up in this Jardines del Rey archipelago (translated as ‘Gardens of the King’), which offers consistent NE winds at 18-20 knots. Launch from Playa el Paso. Just 10km from Cayo Coco International Airport, this is worth a test-run.

The other way, heading west of Cayo Guillermo and Cayo Coco lies Cayo Santa Marina – a separate island nestled within the same archipelago. In the province of Villa Clara, this spot is accessible only by a 70km bridge across the lagoon! It is surrounded by awesome mangroves, that becomes an obstacle playground for kiterboarders. The water depth is super shallow here, but it makes for a change of scenery if you are open to investigate!

A bit of a wildcard option, but let’s say you’re in Havana city and don’t have the time or access to tour Cuba for the best launch spots. What other choices are there? Well, for the fearless and experienced kiters only, located close to the city of Havana lies a tricky entry point into the water, called Malecon. Alternatively, you can pay a daily fee to access Club Habana for access to this small beach and launch on a really tricky jetty closing, with 200m of channel to exit. Not the best but it’s something for the desperate and committed!

Cuba is a holiday mecca, so there’s a tonne of stuff to keep you occupied while the wind ain’t blowing.
Anything from deep sea fishing and SUP, to town and city visits. Ride around in a Fotingo (old car), hire scooters, drink rum, eat fish and dance salsa.
Or head to the mountains ranges of Viñales to the west of Havana for caving and rock climbing adventures, visit a tobacco farm and find out how Cuban cigars are made. Head to Expert Vagabond’s post for more Viñales and Cuba juice.

Where to next? If you’re after a totally unique flat-water playground, checkout kiteboarding in Atins, Brazil. Or head to Central America for some waves? Here is a guide on kitesurfing in Punta San Carlos, Mexico.

Checkout some schools from Cuba

Menu
Log In ×
Clear Clear All
Get in!
Have you got an account o Kiterr? Sign-in here.
Or create a new account here. It’s free!
Get in touch 👋🏼